The future is a mirage yet to form.  What’s coming can’t be known, and, in certainty’s stead, expectations arise.  I had expectations for Chris “The Professor” McGowan’s guest blogging at BPoFD.  Those expectations were exceeded, and exceeded again, and exceeded again.  Chris did a wonderful job.  His monolithic diatribes were a refreshing departure from my terse repostings of puppies chasing laser pointers.  To illustrate, look at the amount of Theresa Petaccio Lauds he accumulated in three day’s speaks volumes.

Equally impressive was how quickly Chris was able to acclimate himself to the Gordian Knot of WordPress software, which took me a monthlong intensive at the local community college to understand.  As you can see, my words are arranging themselves around the pictures.  Chris did this.  I have no idea how to change it back, and I am glad.  The professor has altered the physical and spiritual landscape of BPoFD forever.  This demands reward.

From now until the end of time, BABY PICTURES OF FAMOUS DICTATORS will be employing Chris “The Professor” McGowan as Assistant to the Managing Editor.  His duties will include a weekly “From the Lectern” post, editing my rambling, and compiling the site’s statistical data.  For his troubles, Chris will receive a weekly salary of ONE Nutty Professor from Captain Hook’s Pirate Bar and whatever he wants from my fridge whenever he comes over to my house where I live. 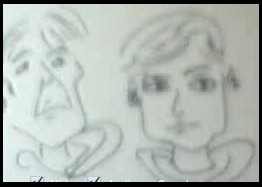