William Henry Harrison, I salute you and the glorious cosmic irony of your Presidency.  From your heroics during The Battle of Tippecanoe, to the thirty-two days you spent in office, dying of pneumonia, you forevermore altered the idea of what a President can and should be.  Your nicknames were indelible: “Granny Harrison,” “The Petticoat General.”  Against the infamous Martin Van Buren smear campaign you were steadfast, a true Whig.  When your opponents characterized you as “a geriatric who would rather sit on his porch drinking hard cider” than administer to the country, you co-opted their censure, adopting a bottle of hard cider shaped as a log cabin as the symbol of your campaign, an image I cannot even imagine.  How can a bottle be shaped like a log cabin?  I would think bottles would have to be shaped like bottles.  You thought otherwise.  You were able to manufacture bottles of hard cider shaped like log cabins, and to win the Presidency of the United States by way of a nonsensical image.  You would not be the last, William Henry Harrison.

But you were not immune, William Henry Harrison.  Underneath that veneer of moral fortitude and equanimity was a vulnerable man, a prideful man, a man naked to the icy gales of slander, as all men are, deep down.  You took your opponents’ words to your formidable heart.  To prove your mettle, your resiliency, you delivered your inaugural address-the longest in history, coming in at nigh two hours-on an uncharacteristically freezing March Day, sans coat or hat.  You caught pneumonia, and died thirty-two days later, a trailblazer to the end.

A certain brand of men meet death quietly, assuredly.  From this world they fade gracefully, and are remembered, and then forgotten, as good, sure men.  Another brand of men meet death in a callow, self-destructive manner entirely counter to their lives up until that point, and are remembered, and then remembered, as good, sure men just the same.  William Henry Harrison, surely you were, and remain to be, the latter.  I salute you, this day after President’s Day.

The Rallying Cry of The Presidency of William Henry Harrison

Old Tip he wore a homespun coat, he had no ruffled shirt: wirt-wirt,
But Matt he has the golden plate, and he’s a little squirt: wirt-wirt! 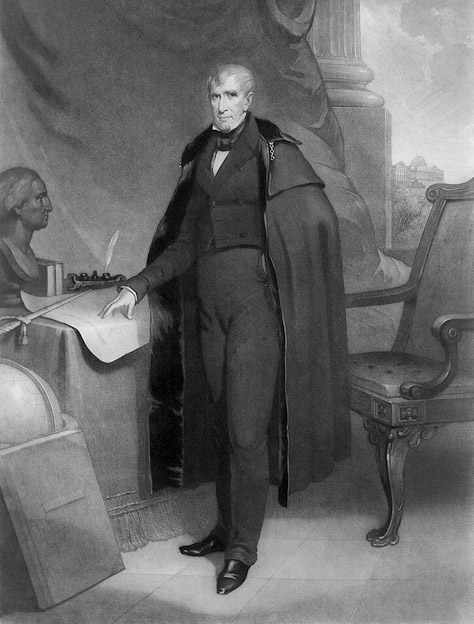