Has there ever been a wholly successful cinematic trilogy? On purely financial terms, of course. The current marquee dominance of reboots and sequels and sequels to sequels is a direct result of consistent, staggering commercial returns for studios, dividends first evidenced by Star Wars and later cemented by Sam Raimi’s Spiderman series. Sequels, somewhat like bonds, proliferate through risk minimization: consumers are sold and resold a trusted, secure commodity by an ensured, known provider. The returns on film trilogies, however, are much more variable. This is historically the fault of the third, conclusive film. Return of the Jedi introduces the Ewoks. Lord of the Rings: Return of the King seems to end three anticlimactic times before it actually ends. Abandoning genre offers no refuge: The Godfather: Part 3 is a qualitative implosion, a misfire shot so wide its bullets graze its predecessors. Never do trilogies end as well as they began.

Christopher Nolan’s The Dark Knight Rises seemed poised to be the exception to this rule, the lone ascension among every other trilogy’s regression to the mean. What Nolan accomplished with the preceding Batman Begins and The Dark Knight wasn’t a merely reinvigoration of the Batman property, it was a redefinition of interpreting source material, an elevation of pulp fiction without total concession to populism. He made two Batman movies of equally enormous critical and financial success, and upon his shoulders the expectations of millions of people and billions of dollars were heaped. Nolan appeared unfazed by the surrounding hype, opting for a lesser known villain and making precisely the film he wanted to make: a self-reflective and solemn comic book story buttressed by metropolis-scale set pieces and moral conflict. The Dark Knight Rises is a serious superhero movie striving to become a serious superhero film, but never does it do more than strive. Instead, it regresses back to that inescapable mean. 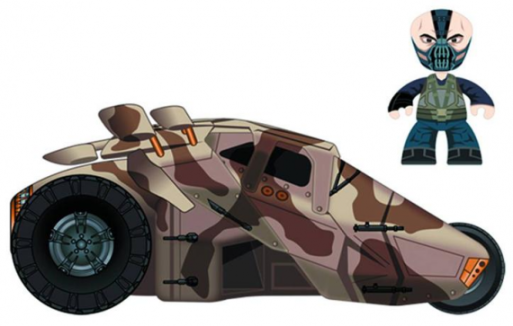 Many of TDKR‘s deficiencies are endemic of Nolan’s other work: rampant humorlessness, stilted pacing and excessive exposition, sophomoric philosophizing in lieu of coherent thematization. While these off note played at lower volumes in his previous two Batman films, here they aren’t counterbalanced adequately. The novelty of the approach in Batman Begins, Heath Ledger’s self-eradicating performance in The Dark Knight, these were artistic assets–and vital distractions–that aren’t present in TDKR, and their absences force one to recall the idiotic sonar sequences in The Dark Knight, the uninspiring villain choices in Batman Begins. Suddenly they’re not parts essential to the whole but flaws overlooked.

There is no overlooking Bane. As “controversial” as Nolan’s selection of Bane may have been, no expectant criticism could have foreseen how laughable the villain is in practice. He is a garbled concoction of faux furs, half-baked ideology, and a fan fiction backstory (“Born in hell, forged by pain”). The implementation of his voice in the film is so ill-advised, so moronic, that it plays as perverse joke. The effect is as ineffective as Tom Hardy’s acting, which is limited to a single closeup of his eyes, which can be affecting. Less affecting were Michael Caine’s fifteen tearful speeches, and Catwoman’s bleating wisecracks, and the romance between Bruce Wayne and Miranda Tate, and the romance between Bruce Wayne and Selina Kyle, and essentially any filmic request of emotion on any level. The poignancy of Heath Ledger hanging outside a speeding cop car’s window outweighs the emotional weight of The Dark Knight Rises by a megaton.

Ultimate disappointment should be reserved for the film’s climax, which exists counter to what always made Nolan’s approach inspired: his refusal to concede to the tropes of the comic book movie. The final twenty minutes of TDKR embraces enough blockbuster cliches to turn the whole trilogy average. There’s a ticking time bomb, a dropped detonation device and a setup for a sequel, all capped by a death acted out with the panache of community theater. Unlike its predecessors, The Dark Knight Rises is a failure, one that will be met with exorbitant financial success and a lesser degree of critical acclaim. Once again, audiences will be reminded of the elusiveness of wholly successful trilogies. Then they’ll forget, and get back in line for the next feature.