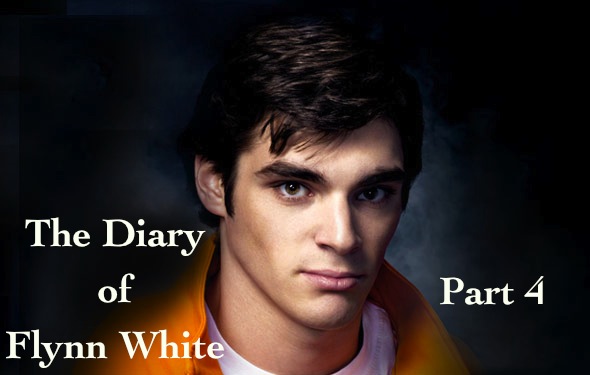 (Please note: These diaristic recaps of the final eight episodes of AMC’s Breaking Bad are written from the point of view of Walter “Flynn” White Jr., the son of Walter and Skyler White. Given this conceit, certain liberties will be taken with Flynn’s characterization, story lines, and awareness of events. Barring the flash forwards, which won’t be included and would amount to little more than pure, stupid speculation, as many scenes as possible will be chronicled in these recaps, albeit tangentially, through the eyes of Flynn.)

Excerpted from The Diary of Flynn White

I was so worried that mom had left the oven on, but now I know that everything is going to be a-okay. Just as I was opening the door to my room to check the gas smell, Uncle Hank showed up! I heard him and someone else (probably his partner Agent Gomez (?)) yelling and knew they probably smelled the gas too and would check it out. So I went back to working on my ASU application. I can be such a worry wort sometimes (not gonna mention that on the application). 😉 I had reached the question about my idea of a perfect Sunday, which is staying in the W Hotel Albuquerque with unlimited Pay Per View and Toblerone, when dad came into my room. I didn’t even hear him! For a mild-mannered chemistry teacher with no history of murder or drug ring running, he sure can sneak around our house like a murderous drug ring runner. He was even carrying around a toy gun, to emphasize his faux sneakiness. That’s my dad. The practical joker. I played along, of course, and was super quiet while he searched my room and didn’t say goodbye or anything like I didn’t exist. Let’s just say that whatever cancer he has, he definitely doesn’t have Sense of Humor cancer. Ha, ha!

Best. News. Ever. Also Worst. News. Ever. So Average. News. Ever. I’ll start with the Worst. News. Ever. Dad had another cancer pass out. This time it was at the gas station, and, as is often the case with cancer patients, he doused himself with gasoline as he passed out. When I’m done developing the podcast for savewalterwhite.com, I should invent gas-retardant clothes for cancer patients, since this is an event that definitely occurs all the time definitely. But onto the Best. News. Ever. Until the new carpets are installed in our house, WE’RE STAYING IN THE W HOTEL ALBUQUERQUE. Just like the rappers on MTV2. That means unlimited pay-per-view, unlimited Toblerone. There’s even a sick pool that atmospherically glows. Since me and dad are so much alike we both couldn’t sleep and found ourselves chilling by the pool despite not having our matching Nautica trunks. And dad had a face on like his wife had just asked him to murder his meth cooking protege/surrogate son (yeah right like I’m not son enough yeah right) so I hugged him and said next time we’ll remember out matching Nautica trunks. Here’s to hoping FloorScapes takes their time with that carpet. I’m off to watch The Hangover for the millionth time. This is one sleepy one man wolf pack.

Song: “The Joker & The Thief” by Wolfmother (from The Hangover soundtrack)

Called Uncle Hank today to see how my letter of recommendation for ASU is going. Not sure it’s going at all. Agent Gonzalez (?) answered the phone and said that Uncle Hank was making a home movie with his sleepover buddy and Aunt Marie was at her purple therapist. Guess I might have to attend The University of Phoenix after all.

Whatever. Maybe I can dorm with Louis. The movie Uncle Hank was making sounded pretty boring too. Not to be rude. Just to be objective. From what I could hear, it concerns a mild-mannered chemistry teacher who transforms into a murderous drug murderer kingpin meth overlord of death, ruining his meth protege’s life in the process. Like that’s believable. That’s as believable as a DEA agent showing up at the exact moment a meth protege is about to burn down his meth professor’s house, convincing the meth protege not to burn down the house, and pulling away at the exact moment the meth professor pulls onto the street. Def not buying that on the W Hotel Albuquerque Pay-Per-View.

Called Uncle Hank again today. About the letter of rec. Got Agent Guacamole (?), again. He said that Aunt Marie was firing up her purple casserole and Uncle Hank was ‘busy.’ I was like, busy with what? Organizing a life-or-death bait-and-switch with a desperate, emotionally-obliterated drug addict who just wants one person in the world to care about him? I thought that, didn’t say it. Uncle Hank has been an IRL jerk lately. You’d think that if my dad can still be a standup guy who is always available to support me every day of his life while he has cancer and owns a carwash, Uncle Hank could do that too. Whatever. Not everyone can be as standup as my dad all the time. That’s why I love him. And Uncle Hank too, I guess. Okay, don’t guess, really love. Because no one’s perfect! I used to worry that my letter of recommendation may never get written, but now I know everything will be a-okay.

Dad and I took a fun trip to Albuquerque plaza today. The day was a true beaut. Blue skies and clear minds, that’s all I ask for. Even with dad’s cancer being back, I just can’t help looking on the bright side of things. Dad went over to sit on a bench, as if he was waiting for someone, someone who he would maybe assassinate. I took a relaxing stroll around the plaza. I saw so much cool stuff! I saw a druggie use a pay phone in 2009. I saw some guy who looks like Uncle Hank in the most conspicuous van I’ve ever seen in my life. I even saw a neo-nazi hug his adorable daughter. There’s so much life out there, waiting to be seen, if you’re willing to wait to see how much life is out there, really. Great day with dad. Looking forward to absolutely nothing but more days like this one. Until next week.