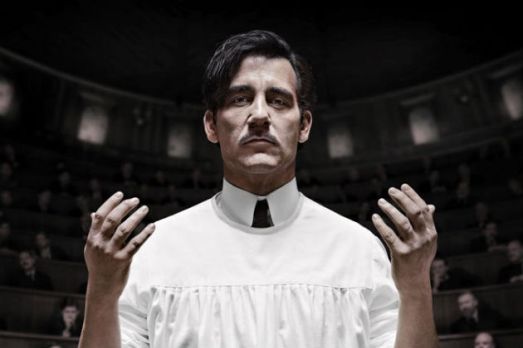 Healthcare is currently the largest industry in the United States of America. Thanks in large part to momentous advances in sanitation and medical technology, human life expectancy has nearly doubled over the last 100 years, and the greater American economy has adaptively shifted its focus from the production of goods to the preservation of life. The tenability and future implications of this shift can be debated. What can’t be is the semi-scary speed at which this transformation occurred. At the dawn of the last century, what we today call healthcare was a bloody, mostly-doomed exercise in trial & error; the interior workings of the human body were unknowns as unimaginable as the deepest depths of oceans or the farthest reaches of space. The precision of medical treatment then and now is meat cleavers and scalpels comparatively. For most, going to the hospital in 2014 means bankruptcy. Then it meant death.

Set in 1900, Steven Soderbergh’s The Knick is a hospital drama inasmuch as it is set in a hospital, but the modern concept of “hospital” applies very little to the titular Knickerbocker. You don’t visit The Knick to feel better; you visit The Knick not to die. In a television industry whose chief concern is pleasing, not challenging, its audience, this slight variation in stakes conceptually makes a universe of difference artistically. Death on The Knick is the rule, not the exception, and this is what makes the drama so direly modern. Just as it was 100 years ago, death is the rule, not the exception, for everyone. We can distract ourselves from the fact, but the inevitably remains. There is no cure, only forestallment. All hope is false hope. Most shows–most art, for that matter–distracts its audience from this fact; The Knick actively, constantly, and gorily reminds its viewers of it. It doesn’t just make you stare into a wound that will never heal. It pours salt into the wound as you stare.

A probably damning misconception about The Knick is the idea that this is another antihero story, that Clive Owen’s Dr. Thackery is a spiritual successor to the male antiheroes like Don Draper, Walter White, and Tony Soprano, those paragons of Golden Age TV protagonists. And anyone who watched the pilot would agree: over the course of the show’s first hour, Thackery checks all the male antihero boxes. He does drugs, is super racist, simultaneously exhibits genius talent in his field. However, unlike his ostensible forbearers, Thackery never once privileges his personal interests over those of society. His truest devotion is to the millions of characters off-screen, not the few closest to him and on it. He isn’t eschewing morality for the sake of his family, or money, or power, or to bandage some festering Freudian wound. His imperative, before all else, is saving strangers’ lives. In this way, Thackery is a kind of artist, The Knick a meditation on the artistic process. His question is the artist’s question, How the fuck am I supposed to save lives with nothing but my mind and these shitty fucking tools? This is a question antiheroes are usually too busy transgressing to answer. If Whatever That Greg Kinnear Show Was Called and Whatever That Christian Slater Show Was Called are any indicator, viewers are feeling the symptoms of antihero fatigue. Thackery can very well be the anti-anti, the cure to that malady. A real–can you imagine?–hero.

If the list of The Knick‘s merits ended there, it would still be the best new drama of the summer. But, from a technical perspective, the first episode is one of the ten most accomplished pilots in as many years. To put it lightly, Steven Soderbergh directing a television pilot is a lot like Mike Trout pinch-hitting in a Little League game: the talent transcends. Soderbergh establishes from shot one a tableau of stark binaries: frantic surgeons in pristine white are observed by immobile men in lightless black, high-definition subjects are foregrounded against impressionistically indistinct backgrounds, modern ambient music accompanies scenes of staid antiquity. With mad scientist gumption, Soderbergh combines and separates and recombines these explosive binary elements, as if vinegar and baking soda could be individually rebottled after being mixed. The commensurate artistry on display in every shot of this Cinemax show is, at this juncture, more than the sum total of everything on its parent company HBO.

Most of these lauds are macro, but The Knick plays equally well on the micro scale, in the otherwise overlooked details that round out and make real a fictional world. Henry James, a contemporary of The Knickerbocker, once said that a novelist is someone “on whom nothing is lost.” Soderbergh is of the directorial camp that films their work through this scrupulous novelistic lens. The stuff the mind recognizes only on subsequent viewings is the gravity that keeps his story grounded. It’s insubordination flashing silently across a med student’s face, casting the decisions of his superior into doubt. It’s surgeons consoling each other about a failed operation while, way in the background, the candy stripers change the lost patient’s bedding. The Knick is always dead set on exploring every aspect of its characters and setting, so much so that it literally and figuratively looks into their insides, those unseeable industries working beneath the skin. Dedication to an artistic vision like this doesn’t happen on television, or, at least, it didn’t until now. When nothing is lost, everything is saved.

Strawberry Verdict: 5 Strawberries out of 5