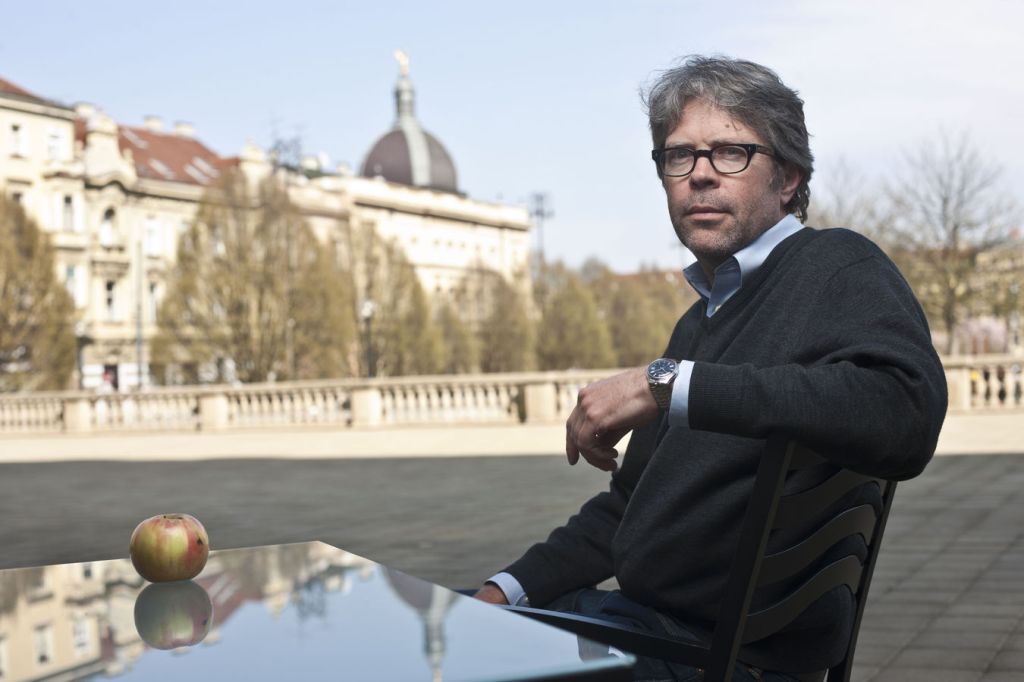 The first sentence of “Father Away,” Jonathan Franzen’s essay about spreading the ashes of David Foster Wallace off the coast of Masafuera, ingeniously ends with the word “lobsters.” Over the course of seven clauses, Franzen semantically ferries the reader from a satellite’s view of the earth (“In the South Pacific…”) to the bottom of the ocean, constructing a world along the way in language that shifts, in deliberate order, from the technical (“…seven miles long…) to the poetic (“…but is devoid of people…”). Birds appear early on, as they goofily tend to in Franzen’s work, transforming the sentence–and excuse the implied comparison–into a kind of compressed retelling of the Book of Genesis. Having already created his heaven, earth, land, sea, beast and fowl, Franzen populates the world he has built with the “handful of fisherman” who catch “lobsters.” To the lay reader, this detail scans as reportage, a statement of fact about an unfamiliar place presented without authorial bias or emotion. For readers who understand the essay’s function as a eulogy for a writer, a suicide whose maybe most famous essay was about the ethical question of lobster consumption, the word choice takes on many other meanings entirely. That one word–“lobsters”–becomes a meticulously encrypted message sent across time and space, head and heart, from a living friend to his dead friend. It says “I miss you, bro” without actually saying it, in a manner only these two particular bros could have appreciated. Almost no one currently breathing is writing sentences at this level. We should all be so lucky to be grieved so eloquently.

Like Jonathan Franzen, the novelist Jennifer Weiner writes sentences for a living. Her popular novels, whose illustrative titles include Best Friends Forever and Good in Bed, sell millions of copies, are reviewed in The New York Times, and contain sentences like, “Purse.” Though “genre” is a vile capitalist construct arbitrarily imposed on both art and its opposite, it’s probably fine to say that, for the most part, Franzen and Weiner write different kinds of fiction. In the broadest terms, Franzen falls under the category of “literary fiction,” while Weiner occupies the shelf space of “commercial fiction.” (These subclassifications will hopefully die along with chain bookstores, but that’s a blog post for another day.) Franzen can be, at times, more commercial than literary, as Jennifer Weiner can assumably be more literary than commercial. The gap that exists between them isn’t really that wide, but it is deep. Jonathan Franzen and Jennifer Weiner lay equal claim to the title of author; that does not mean they are the same.

Since 2010, when a storm of publicity accompanied the release of Jonathan Franzen’s Freedom, Jennifer Weiner has spoken out against the “overcoverage” of male authors and the “entrenched sexism of the publishing industry.” And she has done so for good reason. For far too long a time, male authors have enjoyed an outsized amount of praise with respect to the quality of their work. The novels of middlebrow fiction writers, like Tom Perrotta and Jonathan Tropper, are often judged more seriously than the output of equally talented female writers of their ilk. (Whoever the hell they are.) It’s dumb, and wrong, and inexcusable for a culture centered around an art meant to generate empathy. No argument. Jennifer Weiner was completely justified in her critique of the publishing industry, so much so that Jonathan Franzen, the white male embodiment of all that is wrong with publishing, agreed with her. As he told The Daily Telegraph, “There is a long-standing gender imbalance in what goes into the canon, however you want to define the canon.”

Why, then, would Jonathan Franzen accuse Jennifer Weiner of “freeloading on the legitimate problem of gender bias,” as he did last week?

To this question, there is a single, disappointing answer: Franzen accused Jennifer Weiner of “freeloading on the legitimate problem of gender bias” because Jennifer Weiner is freeloading on the legitimate problem of gender bias. Jonathan Franzen is many things–a luddite, a grump, a birdwatcher–but what he will never be is a writer concerned with forwarding his personal brand. In this respect, he and Weiner couldn’t be more different. Four years after he agreed wholeheartedly with her point, Jennifer Weiner has remained steadfast in her vilification of Franzen, showing a keen willingness to marshall the frivolous court of public opinion, not to forward the cause of female literature, but to sell her worthless books. She tweets constantly about Franzen, coins terms about Franzen, presents a false image that all female authors do is sit around thinking about male authors. Isn’t it strange that her voice is heard above those of Toni Morrison, Donna Tartt, Chiamamda Ngozi Adiche, countless others? It’s likely because those female authors are somewhere actually working, writing sentences every bit as great as the Franzen sentence quoted above; better, even.