The first mention of birdwatching in Purity, the fifth novel from Jonathan Franzen, occurs less than five pages from the beginning, in a short aside about the title character’s mother. Then surprisingly, for nearly 500 pages, the subject is almost entirely dropped. Those familiar with Franzen’s post-millennium output, from his opus-length meditations on the vital preservation of the blue warbler to his hissy fits on the discursive dominance of climate change, will view this absence of ornithology as an oddity: birds are to Franzen as bulls were to Hemingway, what booze was to Raymond Carver and what Jews are to Philip Roth. He seemingly cannot not write about them. Yet here, in Purity, he does. The choice is not incidental.

Purity is, sometimes more in concept than in practice, a reactionary piece of writing. Though much of the novel remains steeped in themes present throughout Franzen’s work–predominantly, the concerns of the educated American liberal at the onset of American hegemonic decline–the animating energy at its core seems to be Jonathan Franzen combatting the literary subculture’s consensus perception of, well, Jonathan Franzen (Franzen the Luddite, Franzen the Male-Centrist, Franzen the Birdwatcher, et al.). The sworn enemy of all things Millennial has chosen to write a book chiefly about a Millennial, whose problems in varying degrees resemble those faced by her generation, and Franzen’s exploration of her character, despite expectations to the contrary, decamps always from a point of genuine interest and care. (There’s even texting!) A lot of talk in the novel revolves around what it means to “get clean,” to free oneself from the cumbersome weights of personal and cultural history. Purity often reads like Jonathan Franzen’s noble attempt to accomplish this feat, to self-cleanse, to rid himself of the lesser aspects of himself. It is an admirable challenge, one that the writer does not fully meet, but Purity is nevertheless an abundantly pleasurable and necessary detour, an articulation Franzen had to make before his career could progress to its next evolutionary stage. 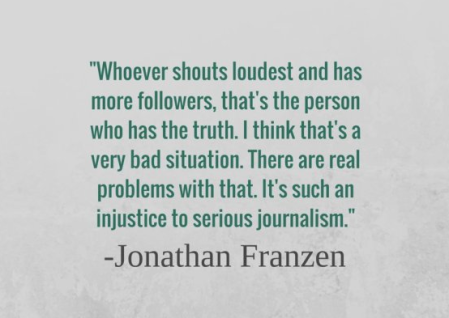 As the book jacket promises, Purity “Pip” Tyler doesn’t know who she is–this is meant, the reader learns, both literally and figuratively. Raised in rural isolation in the woods of northern California, by an unstable mother living under a false name, Pip emerges into the present adult world as a 22-year-old without a history, and the story structures itself around filling in the blanks in Pip’s past. There is a wry kind of humor in an old male curmudgeon writing from the point of view of an young idealistic girl, and the first section that follows Pip makes entertaining use of this meta-dynamic. When the novel opens, Pip is squatting with nominal anarchists in Oakland, floundering on the post-collegiate dating scene and struggling to pay her $130,000 in student loan debt (a bizarrely precise amount that gets invoked to an alarming degree, maybe for comedic effect). A chance encounter with a recruiter for The Sunlight Project, a WikiLeaks-type organization, sends Pip to South America to live on the compound of the Project’s charismatic leader, a political exile named Andreas Wolf. A not inconsiderable portion of Purity details Wolf’s backstory, his traumatic childhood in East Germany, concupiscent teenage years, and then the sensational series of events that brought him to global infamy. With their doomed romance, violence, and political intrigue, the sections recall Franzen’s first two novels, the postmodern political thrillers The Twenty-Seventh City and Strong Motion, but without most of the younger novelist’s bad habits. The effect is something like driving an old commute in a considerably nicer car than you had previously.

From its earliest iterations, Franzen’s fiction has always contemplated the tenuous symbiotic relationship between the personal and the societal, how global systemic circumstances influence and, in a more cynical view, determine individual choice. That what befalls Andreas Wolf in East Germany has an effect, thirty years later, on Pip Tyler’s sense of self may seem like a trite acknowledgement of The Butterfly Effect, but that reading would work to deny the parallels between the novelist’s engineering of a fictive world and the powerful’s sway over the actual one. Pip is in South America because Andreas Wolf wants her to be, simply, purely, and Pip must first come to grips with this reality before she can transcend it. Additional chapters alternately follow Leila and Tom Aberrant, journalists for a nonprofit publication that Pip comes to work for, but to say any more would be to say too much. Personally, financially, both have closer ties to Pip than they can imagine; it is a small world after all. The slow reveal of the connections between these characters demonstrates less that every individual is the sum total of his or her choices, more that every person is the end result of other people’s choices. Franzen is playing with this idea within and without this novel: we are what people say we are, until our actions prove them wrong. As Andreas Wolf the Celebrity is defined by people’s perception of him, Franzen the Literary Celebrity is defined by the perception of his readers–and empowered by his ability, as a writer, to defy these expectations. But if Purity is Franzen’s reactionary response to a fickle public, his attempt to disassemble the literary community’s entrenched notions of his work, he should consider himself only partly liberated. 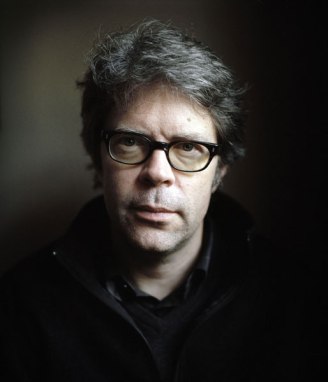 If the term need be employed, “Great American Novelists” should, with each successive book, expand their purviews beyond what originally made them great. Minimalists try their hand as maximalists, realists become fabulists, avant-garde writers shift toward the stylistic center and vice versa. For Franzen, the leap from promising novelist to great novelist came when he decided to ground his literary preoccupations in the family drama, as he did so successfully with The Lamberts in The Corrections and The Berglands in Freedom. In Purity, he occasionally forgets this crucial element to his magic trick, often at the most inopportune of times. His purview retracts too far, or it expands too wide. The thickness of the blood that connects the “family” of Purity‘s characters is closer to that of water, and as a result, there is a steep drop off from the emotional impact of the writer’s two previous novels. Scenes leave you cold. Epiphanies land awkwardly. You end up caring about characters far less than you should. The Corrections and Freedom were masterpieces by virtue of paradoxical tensions: the unimpeachable illogic of their plots, the absorbing unlikeability of their characters, families coming together and persevering despite every reason not to. Why look at stupid birds when the world is ending? Because the world is ending. This was the answer those books formulated in the asking of their central questions. Purity doesn’t have nearly enough birds for this paradox to come to the fore.

You do, however, learn to love the novel as much for what it isn’t as for what it is: a slightly lesser work by an inordinately talented artist. As a childless member of the generation that raised the Millennial generation, Franzen writes from a place of both intense empathy and debilitating guilt; guilt over the global issues Generation X has left Millennials to sort out, empathy for their resulting, likely pointless struggle to overcome these issues. The closing scenes of Purity suggest an even more complicated feeling, an envious and reluctant concession that Millennials, not Franzen’s generation, will avoid the mistakes of the past. For a miserable chauvinist luddite, it’s a sweetly hopeful position to assume. This is, after all, a man who shamefully hangs his head every time he climbs into his Prius because of the effect his infinitesimal carbon emissions have on the atmosphere. Perhaps Jonathan Franzen is just a Millennial born too early. Perhaps acknowledging this fact is how he makes himself pure.

Final Strawberry Verdict: 4.25 Strawberries out of 5