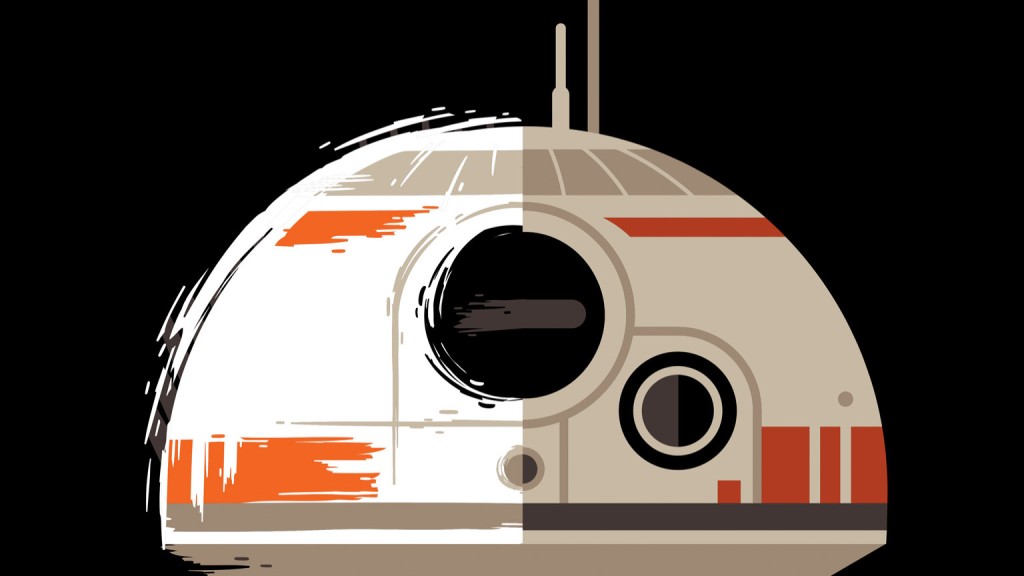 A long time ago, back when the original Star Wars was released, in 1977, its introductory crawl of yellow text played on a mere 32 screens across America, and featured neither subtitle nor promise of additional episodes. Any assessment of The Force Awakens, the seventh film in the iconic franchise, should preface with this overlooked fact: as conceived, the Star Wars galaxy was never meant to expand past Star Wars. (Lucas left the door a crack ajar, not wide open, for the possibility of sequels.) The concept of an episodic saga wasn’t introduced until The Empire Strikes Back, a film that simultaneously broadened the story’s scope while narrowing its focus, laying the track for every Star Wars to come. With the reveal of future installments, Empire finally granted moviegoers access to a new, unexplored fictional universe, a fantasy realm whose scale appeared to share its farthest bounds with the imagination. Along with it, though, came the unveiling of Darth Vader’s identity, which limited the subsequent films to acting as a chronicle of the Skywalker family line. This dichotomy, the infinite scope and finite focus, has alternately elevated and damned every Star Wars film to present, most notably the prequel trilogy, a trio of films whose collective awfulness recalls a seven-hour eyewash with bleach. Episodes I-III were a massive cultural letdown. The Force Awakens, by contrast, is much subtler in its underachievement.

Written and directed by J.J. Abrams (Felicity, Armageddon), The Force Awakens fashions itself from the first as a direly necessary reboot–as its opening lines of dialogue attest, “This will make things right.” For detractors of the prequel trilogy, it’s a rousing mission statement, a rededication to quality by Abrams and his overlords at Disney, who purchased the Star Wars intellectual property from Lucas in 2012. In practice, however, this self-identification as corrective plays as halfhearted; despite a universe of infinite narrative possibility, rediscovery again outweighs discovery. The strongest parts of The Force Awakens, to Abrams’s and Disney’s credit, are the new cast additions: Daisy Ridley as Rey, the plucky scavenger; John Boyega’s gleefully AWOL stormtrooper; Adam Driver as Kylo Ren, the bipolar Vader copycat. These are capable actors playing memorable, relatively complicated characters, and their performances represent an alignment of casting and talent that neither of the previous trilogies wholly achieved. The early sequences of the film, which follow Rey’s pillage of a Star Destroyer and Finn’s defection from The First Order, feel novel in spite of their recognizable story and setting. They’re the proverbial fresh air in what had quietly become a stuffy universe. Then the Millennium Falcon appears, and all that fresh air gets sucked into the vacuum of deep space.

To enumerate the similarities between The Force Awakens and A New Hope would be, at this uncritical juncture, an observation unworthy of white space: not only is the criticism trite, it diverts attention from bigger, more pressing failures. Majority of these deficiencies arise, as they tend to in Abrams’s films, from imprecise writing, with an overreliance on coincidence, deus ex machina, and an untenable narrative pace. When these flaws rear their heads in Abrams’s original stories, like Super 8, they come across as parts of a whole’s messy charm. But when Abrams is charged with the stewardship of a franchise like Star Trek, with its own internal rules and logic, his shortcomings become less easy to dismiss, existing at once within and without the films, ineluctable. Perhaps not unintentionally, Abrams’s reboots proceed to their climaxes at a velocity that doesn’t allow space for thought; in other words, they are very cleverly dumb. How did the First Order come to power if the Republic won the war? Why would Rey and Finn think Han Solo is a myth? Who/what the fuck is Supreme Leader Snoke? Never does The Force Awakens ever feign to address these questions; instead, it rockets forth on blindly confident presumption. Hence the rehash of the storyline from A New Hope, the calculated dusting off of its iconography: it’s an attempt to graft Lucas’s structures onto Abrams’s chaos. The galactic conflict is less clear but the same, the major players unchanged but less compelling. The result is a kind of derelict ventriloquism. The Force Awakens only feels like a J.J. Abrams’s film when it’s foundering.

It is a testament to the potency of the original story, then, that The Force Awakens is still an incredibly enjoyable blockbuster, a fine recycling of a beloved intellectual property. Abrams may right the ship more carelessly than he lets on, but once it’s roughly on course, the thrill of keeling to-and-fro remains intact. As many reviews have remarked, this is the Star Wars that American moviegoers wanted, if not the one it needed, a distinction that prevents the film from bearing any resemblance to art. The Force Awakens is without question better than the prequels, and yet that relative qualitative improvement seems a pyrrhic victory that comes, importantly, at the expense of the franchise’s ability to surprise. Was there any doubt that Rey, not Kylo Ren, would catch the lightsaber? That Star Killer Base would be destroyed? That Luke Skywalker would appear before the smash to black? Not one. What’s the value in a return to practical effects if it’s in the service of a retread? What progress is there in granting women and minorities a place in stories that white men found interesting forty years ago? The Force Awakens should have pushed the Star Wars saga forward, not circled back to where the series was after Return of the Jedi. That may seem like a failure. It was the intent. Watching a Star Wars film in 2015, beset on all sides by grandchildren in Jawa robes and grandfathers in Yoda ears, it’s difficult to imagine that the series ever aspired to be more than an immense commercial apparatus. But it did. The original Star Wars, long before it was rechristened A New Hope, was undeniably the work of an auteur, a singular cinematic vision that drew from myriad influences to synthesize the ultimate hero’s tale for the Baby Boomer generation. To over-intellectualize the series, Star Wars has always been about the war between the two prevailing American identities, with the Rebellion embodying the country’s revolutionary past, the Empire its dehumanized, imperialist present. (Emperor Palpatine was literally modeled on Richard Nixon.) But like Anakin Skywalker, America has come to exemplify the tyranny it once rebelled against, as Star Wars has come to resemble every other movie it originally stood out from. Why would Americans prefer fruitlessly chasing the past instead of forging new joys in the present? Because looking forward would mean progress, and there’s far less money in that. So we return to that far, far away place to find it and ourselves distressingly the same, unable to learn that distance between discovery and rediscovery isn’t two letters but a galaxy.

Final Strawberry Verdict: 3 out of 5 Strawberries