The acclaimed dressmaker at the center of Phantom Thread, the new film from Paul Thomas Anderson, sews cryptic notes into the seams of his creations, secret messages never to be glimpsed by any eyes but his own. His name, somehow, is Reynolds Woodcock (Daniel Day-Lewis), and he learned his trade from his mother, dearly departed. Early scenes show a life of meticulous routine, the terse breakfasts that begin Reynolds’s days, the martini dinners that conclude them. Despite exquisite appearances to the contrary, it is a minimal, ascetic existence, meant to maximize the splendor of the work, the evening and wedding dresses designed by Reynolds and sewn, notably, by his team of seamstresses, all of whom are women. Like the lonesome plunger salesman in Anderson’s Punch Drunk Love, Reynolds is a man beset on all sides by women who, nevertheless, doesn’t have a woman in his life. He is married to his craft, cursed with bachelordom. Whenever his latest romance overstays her welcome in his brownstone, Reynolds enlists his imperious sister, Cyril (Lesley Manville), to send them on their way.

Perhaps unsurprisingly, the drama of Phantom Thread concerns the arrival of a woman who refuses to be sent away. While on the road to his country home, Reynolds stops to eat at a small hotel cafe, quaint and sunlit, where he is served by a clumsy, vaguely foreign waitress, Alma (Vicky Krieps). Reynold’s first glimpse of Alma is, like the film in microcosm, auspicious and misleading: Alma trips over a chair leg while bussing a table and, noticing Reynolds has seen her, blushes crimson with embarrassment. When she arrives to take his order, he provides a litany: rabbit; eggs; bacon; scones; jam, but not strawberry; sausages; tea. It is a sizing up, the first of many. After Reynolds orders his mammoth breakfast, he tears the page from Alma’s notepad, leaving her to recall the grocery list from memory. Later, once he has treated her to dinner, Reynolds will literally measure Alma for a gown, complimenting her tiny breasts as he calls out numbers to a nearby Cyril, who can’t help but inform Alma that “he likes a little belly.” From then on, every line of dialogue amongst the three carries a sumptuous hint of malice, a subtle vie for power that feels enormous given the intimacy of the setting. No word or action seems divorced from malicious, considered intent. By the end of the film, it seems possible that Alma intentionally tripped in the cafe, playing possum to lure Reynolds in, perhaps sensing that she could measure up to his lofty standards. To wit: when she finally brings him his breakfast, it is exactly what Reynolds ordered. 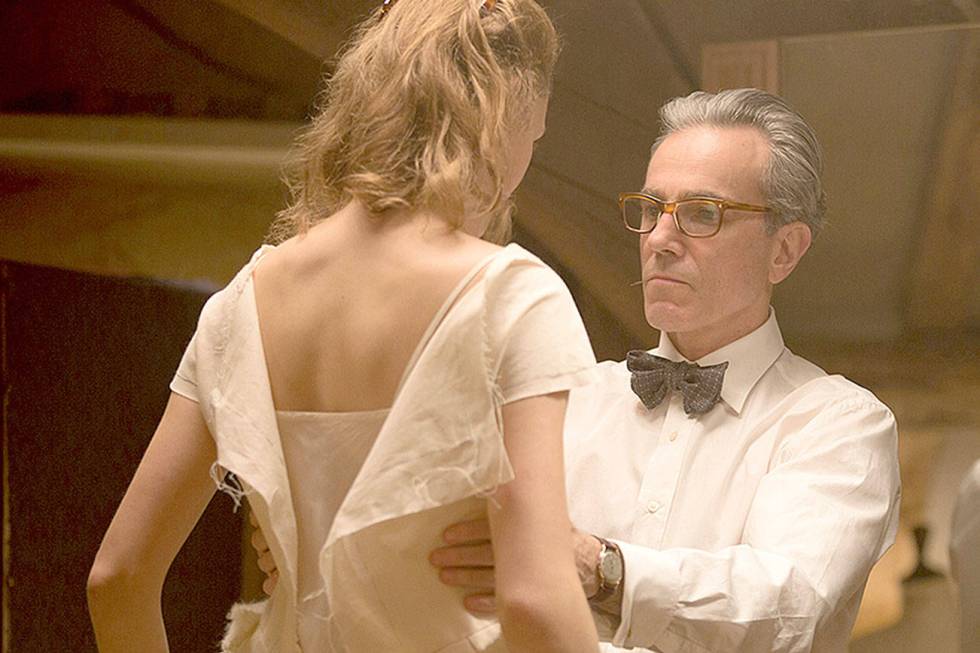 Some have suggested that Reynolds’s and Alma’s meeting is loosely based on the first encounter of James Joyce and his wife, Nora, whose relationship developed into an altogether different but no less perverse arrangement. Unlike Joyce’s letters, though, Phantom Thread conceals its deviant strangeness until the last possible moment, after which it explains too much for a film whose reality seems grounded by ambiguity, not gravity. But what bliss precedes that reveal. Two of the film’s best sequences–a hallucinatory communion with the dead and a late arrival to a New Year’s party–rank among the best work of Anderson and Day-Lewis, in collaboration or otherwise. Either scene would have served as a more perfect ending for the film, though slight imperfections may have been part of the design. Phantom Thread is Anderson’s eighth feature and, purportedly, the last film in which Day-Lewis will act. Appropriately, its central question addresses the incompatibility of artistic greatness and personal happiness, the rareness of a companion who facilitates the coexistence of both, even briefly. Near the end of the film, it is suggested that Reynolds has lost his edge, and fallen out of step with what is “chic.” He rages at this fact then, with Alma’s assistance, resigns to it. Perhaps Anderson and Day-Lewis have done the same. Creating simply excellent art, a hair below brilliance, may be a small price to pay for happiness.

Though Punch Drunk Love is an obvious touchstone, it’s hard not to read Phantom Thread as a companion piece to There Will Be Blood, the 2007 epic on which Anderson and Day-Lewis first worked together. The scale and methods of the films couldn’t be more different–if There Will Be Blood is a raging tempest, Phantom Thread is a cool mist–but both revolve around the obsessive’s imperiled quest for connection. In There Will Be Blood, Day-Lewis’s oil prospector, Daniel Plainview, finds his attempts to form a meaningful bond foiled at every turn. An accident at one of his drilling sites deafens his adoptive son, H.W., making communication between them impossible; a man who claims to be his brother reveals himself as a con artist, only after Plainview’s money. The film is, amongst countless other significances, the hellish vision of an existence without companionship, the ways a solitary life of material accumulation without spiritual satisfaction can warp the soul. Phantom Thread offers a much more optimistic view of the obsessive’s predicament. There is no one person for Daniel Plainview, but there is exactly one person for Reynolds Woodcock, and that small discrepancy makes all the difference.

If There Will Be Blood presented the horrors of a world without women, Phantom Thread depicts the redemptive possibilities–and major frustrations–of a world overrun by them. From his earliest films, mothers are in short supply in Anderson’s work, while fathers and their proxies loom large, casting shadows as vast as an eclipse. That Phantom Thread chiefly transpires in the shadow cast by a mother sets it apart from the rest of Anderson’s films, suggesting an emotional reckoning and growth that has been largely absent from his work. The film belongs as much to Krieps and Manville as it does to Day-Lewis, if not more so, and the sharing of the creative weight seems a great relief on both sides of the camera. Phantom Thread is the secret message sewn into the seams of Anderson’s filmography, without which every other film, in retrospect, feels slightly incomplete. A brief glimpse, a lasting gift.

Final Strawberry Verdict: 4.75 Strawberries out of 5