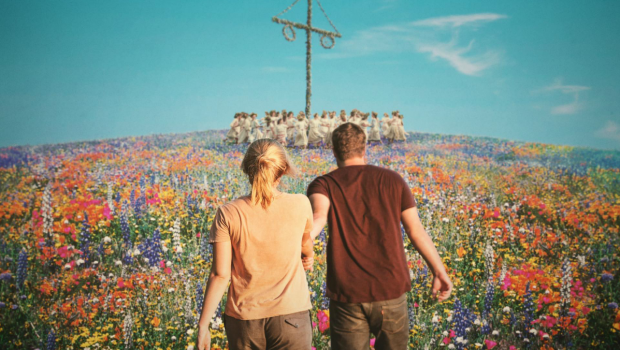 At least to date, the horror films of Ari Aster have shown two principal areas of interest, grief and cults, topics the writer-director tends to explore in that same, deliberate order. In Hereditary, his debut feature from 2018, the sudden, gruesome death of a child plunges a family into a searing bath of bereavement, its water submerging and drowning each of her loved ones in turn. Mourning, for Aster, makes characters lose not just their sanity but control of their bodies; they speak in tongues, burst into flames, skitter like roaches across the ceiling. Hereditary revealed the family unit as an insufficient container for loss, a dollhouse tasked with holding life-sized furniture, and in literal terms, Midsommar presents romantic relationships in an equally unforgiving light. The settings have little in common–Hereditary takes place in exurban Utah, Midsommar in the Swedish hinterland–yet their basic synopses are interchangeable: unexpected death destroys a woman’s family, after which she finds solace in the community of a cult. Tragedy, in both films, is the door through which the supernatural slips, and the occult becomes the only way to exorcise what has gotten inside. Aster is only 33 years old, yet few filmmakers of any age are as direct or consistent with their messaging: Feeling down? Join a cult!

Midsommar opens in the cult of academia, in the midst of a desolate New York winter, the film’s title cards so assailed by snow they’re barely legible. The prologue, grave in tone and image, feels like a carryover sequence from Hereditary, a tunnel from the darkness of that film to the blanched, unrelenting sunlight of this one. In Sweden, the atmosphere will be pastoral, communal, and out of time, so here it must be metropolitan, isolated, and depressingly contemporary. A somewhat troubling email introduces us to Dani (Florence Pugh), a psychology student whose bipolar sister has, not for the first time, expressed intentions to murder-suicide their parents. Across town, Dani’s halfwit boyfriend, Christian (Jack Reynor), is getting beers with his grad school buddies, who convince Christian to break up with Dani, just seconds before she calls to tell him that her entire family is dead. Months later, it’s summer. Dani and Christian are still together, embarking on a trip to the remote Swedish hometown of Pelle, another student in Christian’s anthropology program. Pelle was raised in an isolated pagan commune that, once every ninety years, celebrates the summer solstice with feasts, rituals, dancing, and pies baked with pubic hair. Christian and his bros go in search of fodder for their dissertations. Dani follows because her grief is still raw and she has no one else left.

This is a lot of a setup for a movie that aspires to plotlessness, and most of Midsommar‘s faults originate from an incomplete story and shoddy character development. The film is constructed around the disintegration of a relationship, yet aside from the outlandish tragedy that befalls Dani, we have next-to-no reason to care about her, Christian, or their status as a couple. The main forces keeping the two together are inertia and youthful folly, and while this may be a realistic portrayal of college romance, the looseness of their bond denies the movie any chance of feeling tightly constructed or emotionally weighty. Aside from Pelle, who pushes Dani toward the cult he knows will relieve her suffering, Christian’s male friends are punchlines or vague sketches, cretins who seem present simply to raise the body count. A half-baked subplot about dissertation authorship gestures toward a film that better integrates academic ethics and bodily violence, a deconstruction of the “elevated horror” that Aster makes, but those unresolved ideas get tossed aside the minute the director can chase more compelling visuals and set pieces. With twelve months separating the releases of Hereditary and Midsommar, Aster remains the director he was last year: a first-rate imagist, second-rate dramatist. The arrival of a “brave new voice” usually isn’t as exciting the second time around.

So it is a testimony to Aster’s unusual talents that audiences will likely leave Midsommar in a state that mirrors what they felt after Hereditary: an eagerness to see whatever the director makes next, in a movie theater, as soon as possible. If Aster’s story elements sometimes feel incomplete, it may owe to the fact that he spent the decade before Hereditary directing short horror films, many of them less than 15 minutes long, runtimes that required him to over-prioritize the kinds of memorable moments that would get his larger projects funded. Aster’s visual eye was sharp in Hereditary; it’s sharper and more confident here. The perennial daylight of Midsommar permits him to contrast the blackness of Dani’s grief with pristine whites and colors, kaleidoscopic fields of flora, traditional grabs so spotless they beg to be bloodied. Pugh, styled by Seasonal Affective Disorder for majority of the film, ends it wrapped in a regal gown woven out of flowers, either drugs or magic making their petals appear to heave with breath. That image, along with a dizzying, kinetic sequence set around a maypole, are accomplishments of which maybe a handful of horror directors could conceive. Out of that handful, the group capable of realizing those accomplishments may be a party of two.

Toward the end of Midsommar, Dani and Christian’s relationship passes a point of no return, and afterward Dani, surrounded by the young women of the commune, collapses onto the floor of their shared sleeping quarters. Earlier in the film, Dani’s bleating cries of grief were met with stone silence from Christian, suggesting, as Hereditary did, that men are ill-equipped to fathom or address the enormity of feminine anguish. Cults seem pretty good at processing this strain of grief, though, and as the young women scream and moan in tandem with Dani, calming her, Midsommar reads as an endorsement not of cults in particular, but of tradition and community and emotional receptivity, the social bonds eroded by what has come to be known as human progress. In Midsommar, Ari Aster takes a lot of lateral steps as a filmmaker, but no backwards ones. The director’s greatest potential lies in a unique ability to transform anything into a haunted house: families, relationships, the outdoors. His promise was scary in the shadowy hallways of Hereditary. It’s frightening out here, in the cruel light of day.

Final Strawberry Verdict: 4.5 Strawberries out of 5