Chris McGowan is my most intelligent friend.  After taking a standardized IQ test in the sixth grade, a group of scientists went to Walnut Street Elementary to measure the circumference of Chris’ skull.  Their findings were inconclusive, because the quality of great men and sixth graders isn’t measured numerically, but in the ineffable range of the soul.  Like most prodigious, unclassifiable minds, Chris is acutely eccentric, neurotic, and obsessive.  Like most great men he has principles, passion, and likes Joanna Newsom.  I owe most if not all of my writerly ambitions to Chris, who five years ago told me of a “thousand page book that no one reads about tennis and wheelchair assassins.”  My life would be decidedly different had that Chris stayed silent that day.  This blog would not exist.  The me I know would not exist.  I would have nowhere to put these words.  They would weigh upon me, cast my organs in concrete, clog and pester my mind like a multitude of moths around a single, dying bulb.  Because of Chris that isn’t the case, and I thank him for that, heartily, with every word.

Note: To avoid confusion of the bleeding C’s of our first names, Chris’ responses will be labelled Prof, for The Professor, my personally coined Chris McGowan epithet.

Prof: I was born in Point Pleasant NJ like everybody else on March 7th 1988.

CP: I don’t know anyone else born on that date.

CP: Is that Klingon?

Prof: French.  Typing in capital letters is too hard on the French Keyboard.  I’m sorry.

CP: I learned you can learn, Chris.

Prof: What does that mean?

Prof: I remember being in a car seat, driving around with parents.  Nothing special, but I think it was the only way I could fall asleep.

Prof: My parents.  Mine.

Prof: This is the one.  Can we skip, please?  Or can you make a suggestion for me, and I can agree or disagree?

Prof: Yeah.  Alright.  I also like pigs.  Like the one in Babe, and in Animal Farm.  I think [Babe] is the reason I’m a vegetarian. 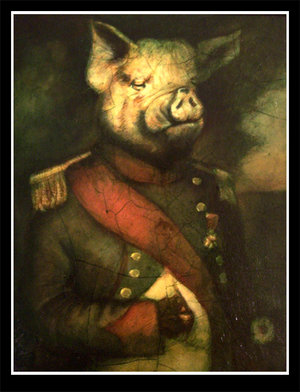 Prof: My writerly weakness is the same weakness that hampers everything in my life.  There are two aspects.  The first one is laziness.  The second is that I move too fast because I want every single line to be great.  Many, many weaknesses.  So many.

CP: What is the last book you read and how did it affect you emotionally?

Prof: I am currently reading Anna Karenina and I cry every third chapter.  It’s affecting me very, very strongly, and there are 400 chapters.  Around every ten pages, I cry.

CP: My name is Chris McGowan, on the eve of my wedding, my beautiful, intelligent fiancé falls into a vat of sulfuric acid at the local male review, she survives, but is severely deformed, paralyzed, and breathes through the top of her skull.  I immediately ______.

Prof: Is she rich?

CP: Could be middle middle class.

Prof: If I’m getting married, it’s probably because I have given up on the world already.  Yes, I would still marry her.

Prof: We listened to Shaggy’s “Banging on the Bathroom Floor [sic]” every morning for about four straight months.  I also remember everyone in eighth grade declaring war on multiple countries on the afternoon of 9/11.  Not my favorite, but I remember it.  Always people putting gum in people’s hair.  Lots of fights.  Handjobs.

Prof: I got called faggot a lot.

Note: It was unclear whether this was an extension of Chris’ previous school bus tangent or his newly formed previous life tangent.

Prof(cont.): I was one of the little asshole copywriter Mad Men guys, but the life version obviously.

CP: My name is Chris McGowan and I just won a billion Canadian dollars I’m totally going to______.

Prof: I would do it.  I would go to space, on my own personalized spaceship though.

Note: The “it” in the first sentence seems to suggest that everyone that wins a billion Canadian dollars instantaneously wants to travel into outer space.

CP: Can you describe the spaceship?

CP: My name is Chris McGowan, if I could be a roadie for one band or musical act in history besides Fleetwood Mac it would be _______.

CP: If you had to travel back in time to kill either The Beatles or The Rolling Stones which band would you kill?

Prof: The Beatles.  In a heartbeat.  Fuck them.

Note: Seriously, for real, fuck them.

CP: Can you describe yourself in three aphorisms?

Note: This took longer than my interview with Brian Tirpak.

Prof: Every dog has its day.  Mind over matter.  To each his own.

CP: What will you have to accomplish to die satisfied with your life?

Prof(cont.): Honestly, I don’t think what I “accomplish” or “do” will have any effect on how I feel at the end.  I think it’s much more about where you are emotionally, spiritually.  I could do nothing and be very happy, or do lots and be very miserable.  I can imagine either happening.  Basically, I’m saying I want grandkids.

CP: What if they turn out to be axe-murdering rape lovers?

Prof: There is an eighty percent chance of that happening, but I still want it.

CP: I mean, like, they axe-murder rape lovers.  They are heroes.

CP: What is your dream job (this includes any time period, but excludes Marla’s husband, of course)?

CP: Why would you ever want that.

Prof: I can’t imagine an easier mythology to into than that one.  I would love it.  I would wear boots.  Smoke and Drink.  Wear a cowboy hat and write songs about the dumbest shit.  I would be so, so happy.  Let’s move on.

Note: I forgot to mention in the introduction that Chris is utterly insane.

CP: What are your greatest athletic, scholastic, and romantic accomplishments?

Prof: Athletic: You have to see me beat these French people at basketball.  I feel like Michael Jordan.  Scholastic: I wrote one really good essay my laster semester [at Rutgers].  My thesis sucked but my thesis presentation, I am proud of that.  Romantic: no one has ever hit me.

CP: You have been elected The President of the United States in a landslide win over your Hasidic Jewish opponent Mastiyahu in the 2016 election.  What policies would you enact?  Which would you discontinue?

Prof: Specifically, I would undo Bill Clinton’s welfare reform, expand Obama’s healthcare plan.  There’s a really good line on The Wire where McNulty says, “a beat cop is the only true dictatorship in America.”

Prof(cont.): I would attempt to change the way we police.  Also, I would totally eradicate No Child Left Behind.

CP: What tattoo would you get if you had to get a tattoo?

Prof: It would say, BE JUST.

CP:Which song best describes you and why?

Prof: I don’t think Kafka spoke English.  Definitely Joanna Newsom.  Definitely Shakespeare and definitely Tirpak because he would have the worst time ever.

Prof: My answer before that dealt with me becoming a country singer, that makes me look utterly insane.

CP: What’s your favorite smell in the world?

Prof: Fire tour or gasoline.  Not both.

Note: Fire Tour is a fire pit in Chris’ backyard or something.  Gasoline is gasoline.

Prof: “Will you tuck your shirt?  Will you leave it loose?  You are happy hurt, you’re a silly goose.”

CP:What is your favorite book of all time?

Prof: Soon to be Anna Karenina or 100 Years of Solitude.

CP: What’s your favorite aspect of your life that you’re ashamed of and why?

Prof: This answer is too obvious.  Yes, what you’re thinking is it.

Note: I have no idea what Chris was talking about.

Chris’ Question for Carmen’s End of the Month Self-Interview

Q9: If you had to marry one of the interviewees, who would you marry, where would it be, and which other interviewees would not be invited to the wedding, if any?