Over the past six weeks, I have fallen in love. I wasn’t expecting to, still can’t believe it happened to me. In fact, I had just about given up all hope of ever finding “The One.” Maybe, I thought, lying facedown on my filthy bed drowning in a puddle of my own tears, there isn’t someone out there for everyone. Maybe I was the lone remainder of the world’s romantic equation, incapable of adding to or subtracting from love, doomed instead to lurk in the margins, solitarily, until I died in the phantom arms of no one. I couldn’t drag my broken smile to another Zoosk date; couldn’t swipe another broad right on Tinder to find she’d swiped me left. Had I sung “Cry Me A River” to another abandoned karaoke bar, I surely would have thrown myself in the unremitting path of the R Train, my greatest worldly enemy. I was, suffice it to say, destitue. Love could not have been farther from what I thought was life.

Then a spunky, effervescent lobbyist named Lesley M_____ walked into my TV, and changed me forever. 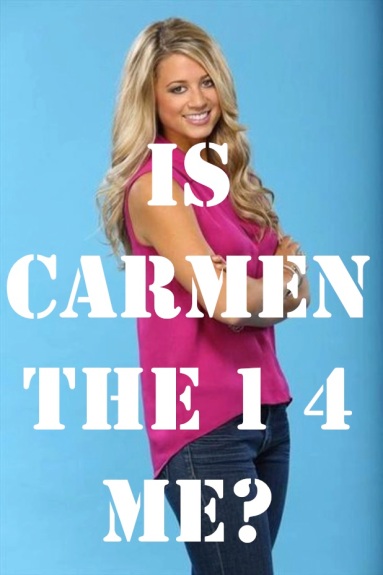 I was “introduced” to Lesley M_____ during the most recent season of The Bachelor. Immediately I felt “a spark.” And immediately after that I felt “a connection.” These feelings, though realer and more palpable than any I’d experienced ever before in my entire life, were slighted somewhat, not as real or palpable as they would otherwise be. Because I was possessed of the knowledge that Lesley would most likely, taking into account her sterling character, beauty, hilarious sense of humor, be chosen by the titular bachelor Sean Lowe as his future bride. But, since I’ve seen Notting Hill like a billion times, I held out hope. Week in and week out, I watched Lesley receive that cursed rose, remain in the competition. She laughed coquettishly at Sean’s inane jokes about protein shakes or whatever, which broke my heart. She dressed up as a slutty cowgirl for a cover shoot for a harlequin romance novel, which mended my heart with magical cardiological glue. I stuck with it, with Lesley, certain we’d find a way.

“Late last night,” we found a way. Lesley M_____ was kicked off The Bachelor, and, if the thirty Bachelor message boards I read are any indicator, she will undoubtedly be The Bachelorette next season. So I have committed wholeheartedly to becoming a contestant on said next season, have committed wholeheartedly to winning Lesley’s whole heart. This is a process though, an involved one, even before actual human interaction enters into the fold.

Having already filled out the twenty-page Bachelorette questionnaire, the next logical, sane, normal step in the inevitable consummation of mine and Lesley’s relationship is the recording of my Bachelorette Audition Tape. I’ve narrowed the list down to five beyond qualified candidates for the director’s chair, but, like love, this decision cannot be made on my own. It takes an internet village. So I’m asking for your help, both for my sake, and for Lesley’s. Please read the list of candidates, and vote, with your conscience, at the bottom. Thank you.

Who Should Direct My Bachelorette Audition Tape?

Pros: Has Worked With Nicholas Cage Before, His Hair

Cons: Is the Antichrist, Want to Light Him on Fire

Pros: Is Voice of My Generation, Free Coffee at Grumpy’s

Cons: Getting to Greenpoint Takes Forever, Everything She Wears

Pros: Have Worked Together Before (Quidnunc, The Glimpse), Colette Caters All His “Shoots”